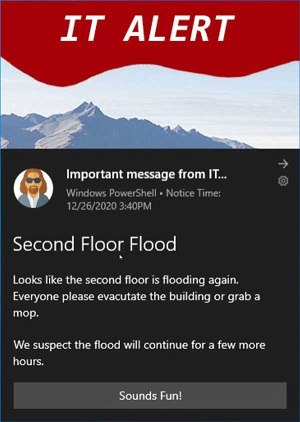 I've been looking for this solution for a week now, thank you so much for this. Works like a charm!

I'm trying to implement this and running into an error. If I run the script as is on my computer, it runs fine. However when I try running the script from MECM, I get errors in the script log:

Any thoughts on why this is happening? I have no finger nails left cause I've been scratching my head so much on this one...

I'm trying to implement this. For testing purposes only, I'm just using your script with setting the parameters and just using your images that you provided. If I run it locally, it works just fine. However when I put the script into MECM and try to run it, it fails. I get the following errors in the scripts.log file.

Any thoughts on that?

What were you putting in the…

What were you putting in the parameters?  Perhaps some characters that it didn't like?

I got the same problem.  Finally figured out that parameters must NOT be in single quotes.  After comparing the animated GIF to what I'm doing, getting rid of the single quotes fixes the problem and the toast goes through.

Hey, thanks for the comment! Yes, single quotes could definitely mess with the parameter parsing. If you want them, you could try escaping them with a back tick.  But generally, try avoiding the special characters like these all together.